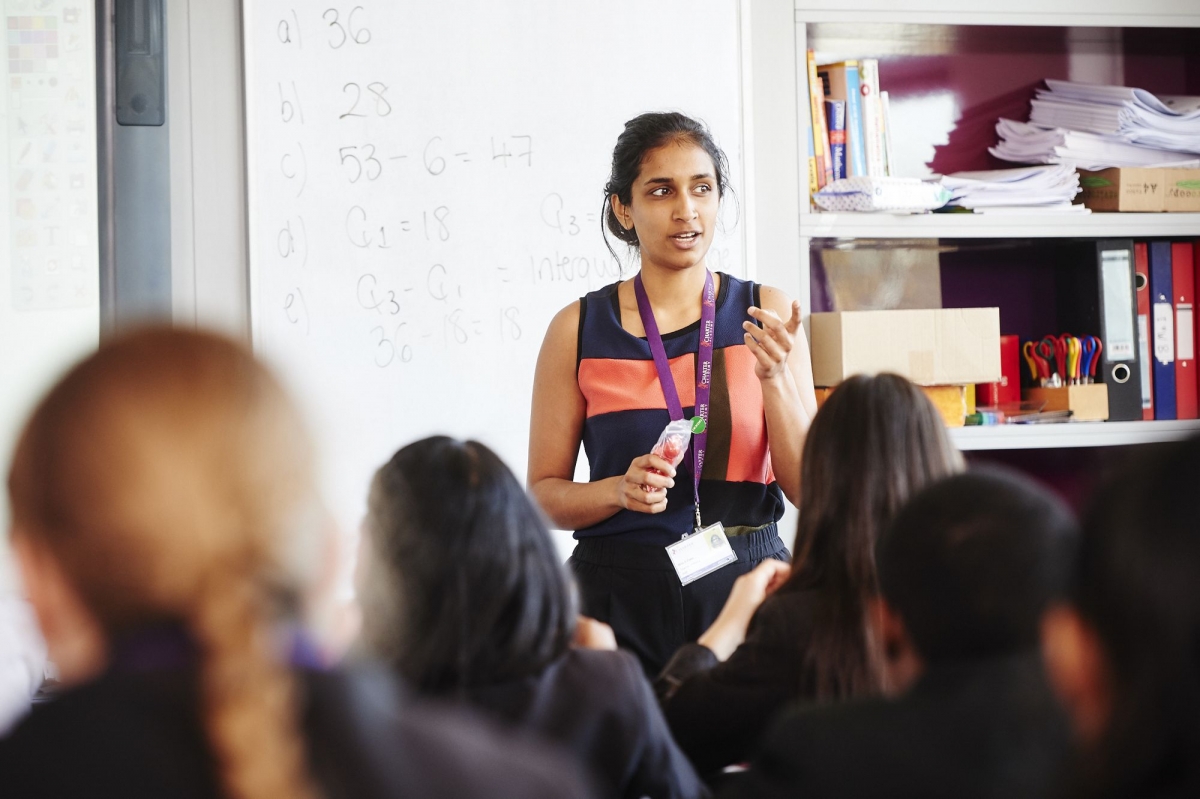 “Drinking straws in bundles of tens and singles are great for year 1 pupils to develop understanding of place value.

“Physically making groups of ten and breaking them up is critical to them understanding the value of any 2-digit number.

“It’s great when you see pupils confidently represent any 2-digit number using straws and also articulate very clearly the value of each number. When they can do this confidently, addition and subtraction of 2-digit numbers falls into place more securely for them. It really is critical to developing the basics of their number sense knowledge.”

“My favourite model is the area model of multiplication (drawing rectangles to represent products, where the lengths of the sides are multiplied together to make the product).

“It becomes really useful in KS2 if pupils are familiar with it and fluent in manipulating it, as it can be used to start constructing pupils’ understanding of multiplication with fractions.

“This is an important idea because, for the first time, they learn that multiplying doesn’t always produce products that are greater.”

“Cuisenaire rods have a myriad of uses. They can be used for number work, including representing word problems as a concrete representation of bar models but can also be used to measure and represent shape and space problems.

“I particularly like using them for fractions – they have no fixed value and so can represent anything and since they are proportional, they can be used to represent fractions. Because they are practical and hands-on, they can be manipulated and moved around which supports conceptual understanding of more abstract concepts.”

“When I was teaching, I loved using the Number Grid ITP. It is great for getting pupils to spot patterns in a given times table and see that multiples go beyond just 12 times a number which pupils usually get to.

“I love the Number Grid ITP especially because you can alter the number of columns and therefore the patterns shift but getting pupils to focus in on the patterns between the multiples and how the gap will remain the same. There will always be two empty squares between multiples of three.

“The best lesson I had with one was when we were looking at the multiples of 3 on the ITP. Once pupils had spotted the pattern of the three times tables on standard ten by ten, I then started playing ‘silly teacher’ and not always selecting a multiple of three for the pupils to spot which were selected by mistake and getting them to explain why.

“We then went a step further and changed the number of columns still with the multiples of three highlighted, subsequently altering the pattern represented and the pupils loved watching it and then checking whether it was still the three times table by looking at the relationship between the multiples – all the numbers highlighted were still three steps away from each other, there were two numbers which weren’t highlighted before one that was.”

“Dienes blocks help to stress the place value of number and pupils can use them to represent numbers and see their value. They are incredibly useful all the way from Year 1, where they start to replace tens and ones to show groups of ten, up to upper Key Stage Two, where they can support a conceptual understanding of more complex concepts such as decimals and percentages.

“Whilst they are a great representation, with increasingly large numbers they become rather clunky (too many 1000 Dienes cubes!) and so they are best used when transitioned into/in conjunction with Place Value counters. The counters are more efficient but the Dienes ensure that a strong conceptual understanding is maintained.

“A great lesson I saw this year exploring Dienes was the teacher collecting all the Dienes from the school (which we know can be tough to source) and challenging pupils to work out how much space on the floor they think the representation of a number in millions might take up. This provides lots of great explanation/reasoning opportunities. Pupils then go on to create the number in Dienes and test their predictions.”

“My favourite resource is the bead string. The power of the bead string comes from realising its versatility beyond numbers within 100. Pupils’ conceptual understanding can be developed by re-assigning the values of each bead.

“What if the ‘whole’ (all 100 beads) was worth 1? Pupils can be engaged in exploratory activities and dialogue, making connections between the value of the whole and its parts and they can manipulate the beads to support their reasoning.

“The bead string engages pupils in visualising maths – so taking the questioning further, what if we had 50 bead strings in a row in the room, each with a value of 0.1 – what’s the value of 50 bead strings? 10 beads? 1 bead?”

“A good use of manipulatives I’ve seen is reassigning the value of Dienes blocks to represent decimals. Dienes equipment is normally used to represent integers; one of the things its structure emphasises is the base ten property of our number system (that each place to the left has a value ten times greater than that to its right).

“The teacher got the class to imagine ‘zooming in’ so that the ‘thousand cube’ now represented one, which then meant the ‘hundred slab’, ‘ten stick’ and ‘one cube’ represented tenths, hundredths and thousandths respectively.

“Pupils were then using Dienes to support them in matching up decimal and fraction notation. A pupil had matched something like 0.25 with 25/1000 until they represented it with the Dienes and then they were able to reason with their partner about how 0.25 must actually be 25/100 because they could see the five hundredths and twenty hundredths (or two tenths).”

“I think the best lesson I’ve have seen is a year 7 lesson on ‘Area.’

“Working in pairs, one student had a geoboard and the other had dotty paper. I was really impressed with how they listened to each other’s explanations, drew diagrams to convince one another and presented their reasoning in full sentences.”

Mathematics Mastery is a research-based school improvement programme, specifically designed for UK classrooms by Dr Helen Drury and a team of experts. The programme includes five integrated components, which work together to build specialist expertise, develop teachers, improve maths lessons and drive change. Visit the website to find out more.