Art for Ark's sake as £750,000 raised by Bank of America Merill Lynch auction

Artwork produced by students across the Ark network have been auctioned alongside works by big names like Henry Moore and David Hockney in an event organised by Bank of America Merill Lynch.

The event, held at the glittering Sotheby's auction house in London, raised over £100,000 to support Mathematics Mastery. The innovative curriculum, which is based on international best practice, was recently found to improve primary student's progress maths by two months and secondary student's pr 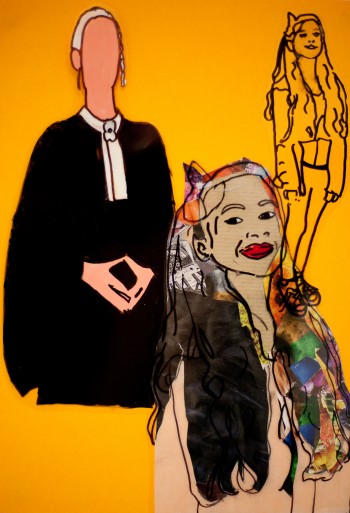 ogress by a month in an independent report by the Education Endowment Fund.

Not only did Bank of America Merill Lynch donate artwork by high-profile artists to the auction, they also made a surprise gift of $1m (£650,000) to support the programme.

Ark's own artists, including Isaac Newton Academy student Harry Taak (pictured above) donated their own artwork. Harry, who created his artwork 'Minotaur' whilst transitioning from primary school to Isaac Newton Academy, said: "I never thought my painting would have been displayed in the school's artroom, let alone at Sotheby's. It's amazing to see it here.

"My painting was inspired by a book I'd recently read, Shadow of the Minotaur. In art class, we were doing pieces on aspiration and I wanted to show how the minotaur aspires to become a good person in the book. I used a 3D effect to show the minotaur coming out of the painting and away from a dark background to represent that."

Ark Academy student Shania Jay Varshani's painting, 'Lawyer', went for £10,000. Funds raised from the sale of the painting, which was inspired by her ambition to become a barrister, will go towards supporting maths skills for students in schools across the country.

11-year-old Ark Globe Primary Academy pupil Syeda Alam said: “It’s overwhelming to know that my work is going to be auctioned with artwork from famous artists. My picture was inspired by us all being united at Ark Globe – for example, there is a bit with students graduating from university and all the hands have different skin tones because that is one of the things we’re all working together for.”

Daniel Parke, age 16 from Ark's Evelyn Grace Academy in Brixton said: "I am flattered and humbled by this experience. To be among these other great artists is a real thrill."

Alex Wilmot-Sitwell, president, EMEA at Bank of America Merrill Lynch, said:“Bank of America Merrill Lynch is pleased to work with Ark to enable the rollout of their Mathematics Mastery programme across the UK to schools most in need. This partnership reflects our company’s long term focus on both education and the arts for young people – two areas that are critical for healthy economies and the development of society.”

Helen Drury, director of Mathematics Mastery, added, “Our goal is to transform the long term mathematical achievement of pupils. This support will help us to build a partnership of over 500 schools, who work closely together to innovate and improve maths teaching across the country. By doing this we hope to transform achievement for over 300,000 pupils over the next five years.”