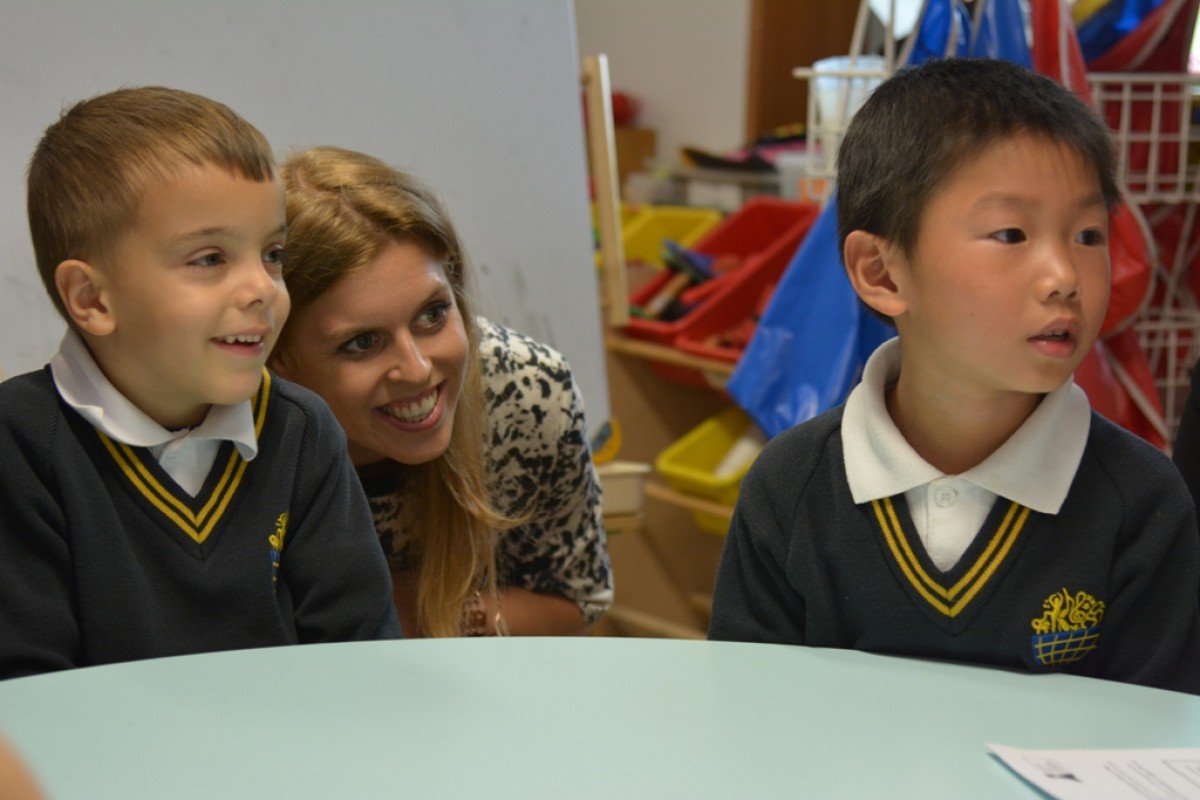 Princess Beatrice told a group of dyslexic pupils: 'Dyslexia is not a pigeonhole to say you can’t do anything. It is an opportunity and a possibility to learn differently. You have magical brains, they just process differently. Don’t feel like you should be held back by it.'

The Queen’s granddaughter paid a special visit to ARK Globe Academy in Elephant and Castle and Bolingbroke Academy near Clapham Junction to see how pupils are supported by the Drive for Literacy programme, a partnership between ARK Schools and the Driver Youth Trust, to develop their reading and writing skills.

Pupils at both primary and secondary school are screened for dyslexia, and given small group and specialist tuition if they need extra support. The schools use a range of evidenced-based interventions and utilise appropriate resources including bespoke computer programmes.  Dyslexia training is provided to whole staff so that teachers and support staff can understand and address literacy difficulties and ensure clarity of instruction, task and support systems are delivered without adjusting high expectations.

The daughter of the Duke of York Prince Andrew and Sarah, Duchess of York told pupils: 'I was diagnosed with dyslexia when I was seven and it was a bit of a struggle to begin with. It was a challenge as I began my school career – spelling and reading was something I couldn’t really get my head around. I created what I describe as a ‘toolkit’ for myself of skills you learn and pick up over the years, which I still have to use today. A lot of my best friends were dyslexic so we used to study together, working at our own pace.'

She said that she didn’t like reading until the Harry Potter books came out when she was eleven: 'The second the story came out, I couldn’t put it down. Now I read so much quicker, so much better and I studied history at university which involved a lot of reading.'

The Princess saw a small language group being run as part of the Nuffield Early Language Intervention, which is seen as an important precursor to the development of  literacy skills 'One of the most important things is to figure out what the best methods are to support young people,” she said. “I came across the Drive for Literacy programme and the partnership between ARK Schools and the Driver Youth Trust - it is inspiring to see how every child in the classroom can be supported. I was really interested to see the way in which they do the screening process for dyslexia. It was particularly interesting to come to Globe Academy because there are real opportunities for children with special needs to really excel. Walking round the classroom and meeting the teachers, the support the pupils have in an area of London with people from a whole range of backgrounds is really important.'

Princess Beatrice continued: 'I went to a school that was really dyslexia friendly, like Bolingbroke Academy. Pretty much half of my class was dyslexic. The most important thing was having great teachers who took the time to make sure we were all really well supported. I did a lot of extra classes, a lot of practice, and a lot of asking questions!'

Tristran Seguim, a twelve year old pupil at ARK’s Bolingbroke Academy, said: 'It was really exciting to meet Princess Beatrice, I was quite nervous before though. I really enjoyed it and she was very nice. The teachers at my school help me a lot to understand certain things and my English teacher will help me get my grades up as I was struggling before, now I feel much more confident in English.'

Aman Miah, a nine year old pupil at ARK Globe Academy, said: 'I was shocked and didn’t expect her to come to my school. I really like coming to Globe, and I like writing.'

ARK Globe Academy, along with all ARK’s primary schools, runs the Nuffield Early Language Intervention, a programme evaluated by York University to raise communication and language skills for pupils who start school behind.

Bolingbroke Academy has been awarded a Dyslexia Friendly School Quality Mark by the British Dyslexia Association and all staff spend 30 minutes every day in organised reading groups after lunchtime.

Principal Claire Edis always wanted Bolingbroke to be a place where pupils with dyslexia could thrive. She said, 'I know people with dyslexia who went through school thinking that they weren’t as good as other pupils,' she says. 'That mindset held them back. I wanted to make sure no child at Bolingbroke ever felt inadequate or unable to take on challenges.'